Heather Goodall , a Quaker herself, gave a fascinating insight into the history of the Quakers. She had charming stories and snippets of information to go with the slides of the tapestry panels.
The idea for the Quaker Tapestry started when a young boy, attending a children’s class at a Quaker meeting, suggested a series of pictures to decorate the room. His teacher was Anne Wynn-Wilson, an accomplished embroiderer. She then decided upon a number of large tapestry panels depicting the Quaker story and beliefs. The same methods and stitches were used as in the Bayeux tapestry. A new stitch was also developed for the lettering and was named the Quaker stitch.
Work started in 1981 and was completed in 1996. More than 4,000 men, women and children in 15 countries helped create the 77 panels. 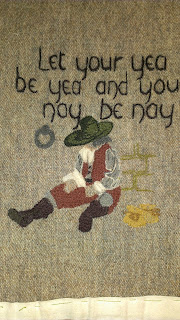 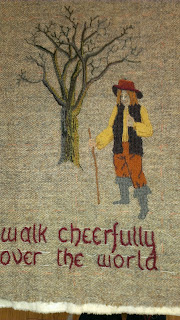 The tapestry is housed in Kendal and is well worth a visit.

www.quaker-tapestry.co.uk
Posted by Lazy Daisy at 21:01 No comments:

LINKS TO OTHER BLOGS

LINKS TO OTHER SITES